July 14th, 2008 Posted by Bar Towel News Editor Beer In The Press No Comment yet 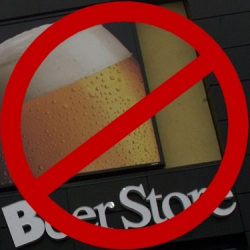 The past couple of weeks have been interesting ones in the Ontario beer scene, as a series of articles in the Toronto Star have led to a lot of vitriol being directed towards The Beer Store, the province’s beer retailing oligopoly which is owned by Molson, Labatt and Sleeman.
The original series, entitled “Bad Brew”, was written by Star business reporter Dana Flavelle, and was spread over four different articles last Saturday through Monday:
The real reason your beer costs more than it should
Cornering the beer market
Small brewers struggle – The hidden story
Ontarians thirsty for answers
The series spawned a long discussion thread here on Bar Towel and dozens of comments on the Star website, with many of those comments being critical of the Beer Store and the big brewers that own it. There were also a couple of follow-up articles in the Star later in the week:
Petition protests beer monopoly
McGuinty has no thirst for beer sales change
Beer monopoly petition grows
The petition mentioned in these later articles can be found here, and has gathered thousands of signatures and drawn attention from numerous media outlets including CFRB, CKNX, CHCH, CBC Radio and CP24.
Also launching in the aftermath of this series was Free Our Beer, a blog from Bar Towel founder Cass Enright that is “dedicated to reforming Ontario’s beer retailing system, from a craft point of view”, and which looks set to become an epicentre for this growing movement.