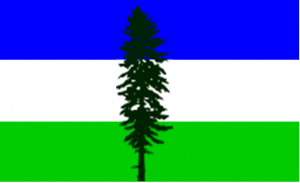 The birth of this new style has sparked a huge debate in the brewing community (see episode 10 of Brewing TV). This style has been called Black IPA (what an oxymoron!) and India Dark Ale, though it was never intended to be shipped to India. The Brewers Association have continued to confuse the issue by calling it an American-Style India Black Ale.

It should be noted that hoppy, dark beers have been brewed for over a century. An excellent example is the Pretty Things 1901 KK that is currently available in private liquor stores in BC, distributed by Raincity brands. But this is not a Cascadian Dark Ale.

So what makes this ‘new’ style different? I say it’s the citrus and piny hops that were developed and grown in the Pacific Northwest, also known as Cascadia. Much like Bohemia, Cascadia is a geographical region with a culture that is not constrained by national boarders. I think Cascadian Dark Ale is an excellent name for this style. Yeah, I know the Vermont Pub was brewing it up in ’97, but where did they get hops? According to USA hops, Cascadia was responsible for 92% of the 2010 US commercial hop production, with over 24,000 acres in Washington and almost 5,000 acres in Oregon.

Matt Phillips is the grandfather of the style in Canada. He started bottling Black Toque India Dark Ale in 2004, and recently renamed it “Skookum Cascadian Brown Ale”. Skookum is a word from Chinook Jargon (the oldest trade language of the American continent) that means strong, powerful and excellent. But despite this new category having 53 entries at the Great American Beer Festival this year, we still haven’t seen many other Canadian versions. Cannery brewing recently bottled a limited edition Wildfire IPA, which was dark and had a pleasant smokiness from the roasted malt. But other than that, BC has only seen a few other seasonals and one-offs on draft.

Likewise, Ontario has mostly been limited to Durham’s Black Eye, which is truly excellent on cask. But if you haven’t been able to track it down, don’t despair. The Holiday 2010 Edition of the Ontario Craft Brewers Discovery Pack has a bottle of Flying Monkey’s Netherworld Cascadian Dark Ale (LCBO#206847), and the Netherworld is also available in its own 6-pack (LCBO#191965)!

So grab a ‘CDA’ and let us know what you think in the forum!