Contribute your own beer reviews and ratings here. 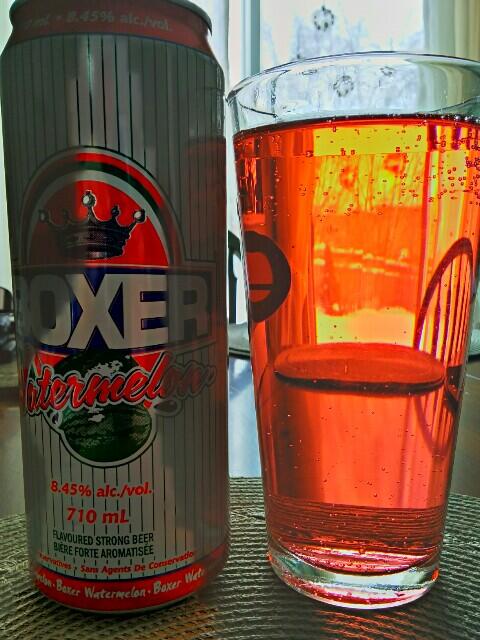 Thought I'd take one for the team in return for those brave souls still trying Trafalgar.

If you were to put a watermelon alco-pop next to it and do a blind taste test you'd be hard pressed to figure out which one is the supposed beer. There was nothing beery about that at all. Not in smell, taste or mouth feel. My watermelon homebrew from last summer, which only used watermelon flavouring (no real watermelon, unlike what I'll be doing for this summer), was way better and that was just my second non-Brooklyn Brewshop mix beer.
lister
Top

There is a time and place for everything (even Boxer Watermelon)

admviolin wrote:There is a time and place for everything (even Boxer Watermelon)

I thought I was going to pass out too after drinking about half of it.

I'm likely one of the biggest gimmick beer drinking posters here and if you're going to do a gimmick beer then I advocate going for it with the gimmick. However Boxer Watermelon took the gimmick and ran...unfortunately into a tree.

Glad you enjoyed it.
lister
Top

I bought one a few days ago out of morbid curiosity and was able to finish maybe half of the can before I dumped it into the toilet. For the record, I am pretty cheap and have relatively low standards so a beer needs to be abjectly awful for me to drainpour it.

I'd say it met my expectations for a watermelon-flavoured Minhas product.

It's barely even beer and tastes worse than malt liquor - not to mention the handful of coolers I've tried in the past were all considerably more palatable (including the real cheap shit like Boone's Farm).
Top
Post Reply
7 posts • Page 1 of 1

Users browsing this forum: No registered users and 2 guests