by G.M. Gillman
This storied Munich beer has been an import for years here but for whatever reason, it rarely tastes right to me. Often there is a chlorine-like note or a weird earthy tone, similar to some other German or Austrian beers. I figure it's probably that they don't travel well and although I try to read the codes properly, I am getting them too old. Well the other day I checked a code again and it seemed to suggest the canning was done in February, thus about 8 weeks old and comparable to Urquell in freshness, say. This assumes they use a 12 month expiration window because the expiration is "02.15" but no packaging date is given here, no "02.14". I think though it probably uses a 12 month system.

This can is a winner. No funky smell, but just a clean beery smell and taste slightly to the dry side of the palate. Good bitterness but very well blended into the malt. It's not a strong taste by craft standards but a good one, and I imagine locally on draft, unpasteurized, would be all the better. But this export version is more than acceptable. It has a mineral, drying, winy-like taste and no lager yeast sulphides, not in this case anyway (I find even well-known names vary in this regard, sometimes the lager sulphur is quite forward, other times it is absent or almost).

And so finally I get the pre-WW I ad that went round the world: "When you're out of Champagne, bring out the Lowenbrau". Quite.

Thanks for confirming this for us.
by Derek
I found that most of their stuff was basically mass-market factory beer, and a little more generic than the other big Munich breweries. They do have a long history, so I've wondered if it was always somewhat watered-down and muted?

All that said, their Dopplebock is actually quite good.

I've always like the Franziskaner hefeweizen as well. Good beer can come from a big factory!

liamt07 wrote:
Thanks for confirming this for us. 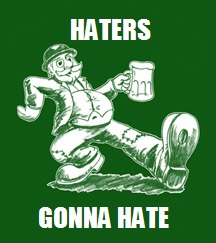 Just had one of these cans. Enjoyed it very much as well!
All times are UTC-05:00
Page 1 of 1
Powered by phpBB® Forum Software © phpBB Limited
https://www.phpbb.com/