Check their Instagram live "story" or whatever the f*ck it's called. Couple different glasses with gold etching.
Top

Those live stories only last 24h. Here's a copy: 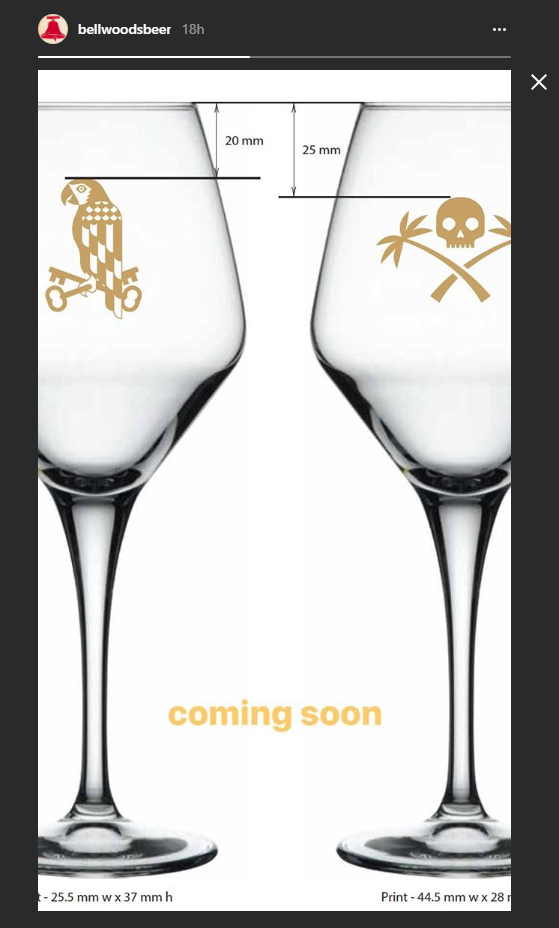 Hopefully only one glass that is double sided and not two separate glasses ...
Top

Barn Owl 10 as a Brett IPA with apricots dropping tomorrow with almost 9000 bottles. All their previous releases were in the 1500-3000 bottles range, so quite the scale up.

Thanks for posting the picture. - I couldn't find anything on their instagram.

The glasses do look awesome. I hope it is one glass. Can't wait for SK.

Great news about Barn Owl. Plenty to go around.
Top

Hopefully only one glass that is double sided and not two separate glasses ...

It's double sided. They had one behind the bar at Hafis yesterday.
Top

Coming down the pipeline...

Before we get into the big beer release doozy of the month, some returning styles you can expect to see are Jutsu, Jelly King, and Roman Candle. The new kids on the block will be Cosmic Tiara, a 9.5% IIPA dry-hopped with Citra and Mosaic (the name is an anagram, for all you wordsmiths), and Blood Orange Jelly King! Keep your eyes peeled on the instagram account for final release dates.

Of all the life-altering changes and improvements Bellwoods has seen over the years, it's unlikely that any could rival the highly-efficient blood pressure reducer that is Hafis. It is but a humble industrial warehouse beside some train tracks, and yet, it houses a very beloved collection of big fermenters, all our barrels and foudres, and a team of hard-working humans. And though every year since we opened Bellwoods has felt like a big one, 2017 was characterized by some seismic changes -- arguably the two most important being more beer (hallelujah), and a little more room in our brains to tackle new creative projects. But before we get too caught up in everything we hope to tackle in 2018, we'd like to counter the first year of running a production brewery, with a well-deserved par-tay.

On December 16th we're having an open house to celebrate year one of Hafis!

We're feeling festive AF and have planned some great snacks and even greater beers (sorry, snacks) to put a skip in your step. Our open house is a great opportunity to check out the space if you haven't already, or simply return for the 47th time because on this particular day Santa Claus himself will be spreading joyous laughter and consuming a responsible amount of alcohol! There will be cookies galore (isn't everyone addicted to sugar?!), poutine (because we're dutiful Canadians), and hot drinks for people of all ages.

Let's talk about a few specifics:
We'll be open regular hours (12-7pm)
We're releasing Skeleton Key! (See below).
Beer stations will be set up around the brewery for you to peruse and enjoy, operating with a token system a la Witchstock.
Merch variety gift packs all packed up and ready to go so that the only thought you have to put into a beer-centric gift is "Um that one." Seriously, you can just point and we'll do the rest.
Tours! Who doesn't love walking around, looking at big shiny things and then hearing anecdotal stories about that one time we did a funny thing?!

Our beloved Skeleton Key returns! This imperial stout was aged in rum barrels for a year, with the addition of ginger, cinnamon, nutmeg, all spice, juniper berries, star anise, black pepper, vanilla, and raisins. Rich and chocolatey with layers of warming spice and smooth vanilla/oak barrel character. And for those who love #properglassware we'll have custom stems up for grabs, along with some snazzy gold on black tees. Is #propertshirts a thing? SK2017 hits Hafis and Ossington locations on December 16th, $16/bottle, with a limit of 8/person.

Nice! Sounds like a fun day for Skeleton Key.
Don't need any of those 'rare' bottles...I missed out on other ones, argh.
Top

I noticed that Hellwoods wasn't among the returning styles referenced. Does anyone know when we can expect to see it make a return?
Top

Maaaaan! My streak of having to work on every single worthwhile Bellwoods release continues. The glass looks awesome.
Top

I need this in my life. One of my fav beers with my fav fruit
Top

I went to the open house at Hafis yesterday. Pretty nice event with Santa and crafts for kids and of course lots of Bellwoods beer.

I'm a big fan of rum and always really want to like SK, but something about the spices just doesn't work for me. It's enjoyable, but probably my least-favourite Bellwoods stout. I am really loving the Robust Porter w/ Vanilla.
https://beerstodiscover.wordpress.com/
Top

For anyone in the Guelph area....I just noticed that the Wooly is having a Bellwoods tap takeover. Thursday jam 25, only a partial lineup so far, but BOYD and skeleton key are there.
Top
Post Reply
846 posts