These guys quietly released their first beer on tap this weekend. It went under the radar as it was brewed off-site: Understandable due to the red-tape they've been dealing with since open.

They also have a few collabs that were done this past week, and can be expected to pop up pretty soon. Not to forget some taps being brews that are hard to find elsewhere in the city (Garden and Revel).

The bar staff is awesome, and often traffic is low, so if you like quiet and the ability to talk beer with people who are just as passionate, swing by for a pint. This place has become my neighborhood regular go-to destination.
Top

I've been wondering what's going on with them. They seem to be having an awfully hard time with their paperwork to start brewing their own beer. Any ETA?
Top

Heard these guys collaborated with Folly Brewpub just down the road to brew an elderberry saison using 15 lbs of elderberries and Escarpment Lab's fruit bomb saison-brett blend (saison, sac brux trois, brett D). Heard it was going to be at their Farmhouse tap takeover and on tap at Folly. Heard it looks kinda like fruit punch right now in the fermenter... I hear so many odd things. The voices... the voices...
groulxsome
Top

Nice the hear they're finally (sort of) brewing.
It's a bit further from me than Duggan's, but their tap list is always a treat, and they have a small, but nice selection of bottles. I also agree it's a great casual, beer-geek friendly place. When I'm in town I try to stop by once a week.
Top

Does anybody know what is happening with them? They appear dead to the internet.

I almost never get to this corner of town, so have only visited maybe a half dozen times when they were just ramping up. A friend who lives by mentioned they are closed and lamented the loss to the area.
They were real nice people, but I wasn't sure they ever really got off the ground. Anybody know the story?
Brands are for cattle.
Fans are cash cows.
The herd will consume until consumed.
Top

Yeah, seems they closed a month or so back (verified biking past recently).

I used to be a regular, but my schedule was wonky and haven't been since the beginning of this year. In a nutshell my understanding was that there was a zoning issue. The top floors of the building were residential, preventing industrial (eg, brewery) from being on the main floor. I'm not 100% sure if that's actually the case, but red tape delays must have played a major part of it because they never served what they brewed in the back.
Top

That's too bad. They were super nice guys. There was one excellent Cask social there as I recall. Unfortunately, it was way geographically inconvenient for me so I only went a few times over the years.
Top

Too bad. I always enjoyed stopping in there, even though they never really had their own beers.
Top 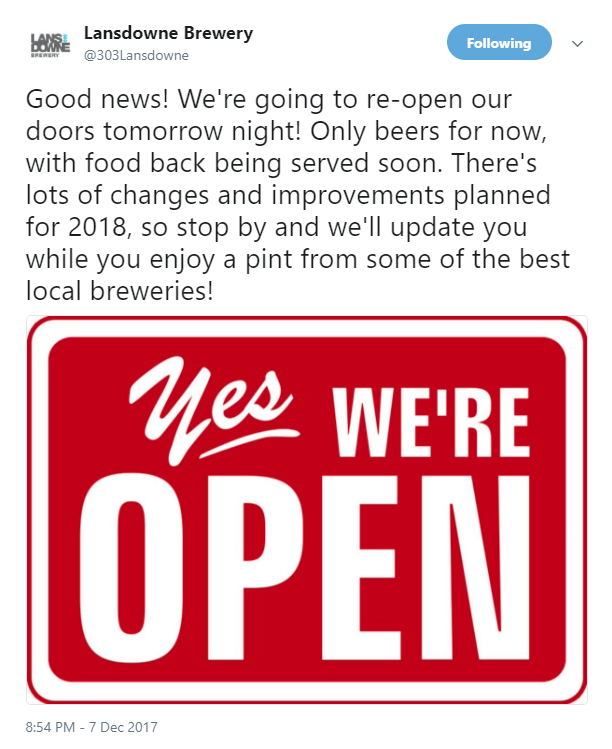 Interesting...well, good for them!
I do miss their root beer.
Top

You're not getting any real estate with it, just assuming a lease.
Top

midlife crisis wrote:You're not getting any real estate with it, just assuming a lease.