Discuss beer travel and regional information, including the best bars and places to check out around in Canada and around the world.

Cass wrote:Heading back to Philly on Friday for a short weekend trip. Will report back any new finds. This site is crazy:

That is awesome! Added to favourites..I'm in Philly a few times a year.

Yes, I will be going there on the weekend!!
Top

OK, a couple of updates on Philly. As always Philly delivers as a city with a great beer scene, rich history, walkable and affordable. Really an under-rated destination.

On the beer front I made it to a couple of new places (to me) as I was staying in the Old City. Khyber Pass Pub is a fun, neighbourhood spot with lots of US/Belgians on tap - Weyerbacher, Ballast Point, Arcadia, Uinta, Elysian plus Belgians like Petrus & Corsendonk. Fun crowd and food menu til 1am which helped as we got in late.

Also in the area I was finally able to make it to Eulogy, a Belgian themed bar - nice spot but it was very late and didn't fully absorb it

Around the corner is City Tavern, which is a recreation of Ben Franklin times, with servers dressed in period costume. Cool spot, but I would have expected a place where the founding fathers got drunk would be a bit more rowdy. Very quiet and seemed more tailored for sit down meals, definitely not boozing. They do have 4 house beers which were quite nice, not sure who brews them though.

One of my favourite spots in Philly is Johnny Brenda's, an all-around good time joint with live music and exclusively local craft beer. A recent addition to the neighbourhood is a Philly location of the Brooklyn BBQ restaurant Fette Sau which is just across the street on Frankford.

And if you're in that neighbourhood it's only about a 20 min walk to Memphis Taproom, a literal neighbourhood bar. Like, it's surrounded by houses. Cool spot, seemed surprisingly a bit sleepy on Saturday night. A small tap lineup (only about 8-10) but diverse selection and a couple of casks too.

The food highlight of the weekend was definitely Zahav, a restaurant that's billed as "modern Israeli". One of the best meals I've had in a long time - you can get a full tasting menu for only $39 per person. Focuses on small plates which is my preference to try lots of things and not over filling. The hummus, merguez, halloumi, rugelach, beef cheek - everything I had was outstanding. And, they have a nice lineup of craft bottled beers to boot.

If anyone happens to be in Philly before the end of April, the Constitution Center has a special exhibition called "American Spirits: The Rise and Fall of Prohibition". Well designed, interactive exhibition curated by Daniel Okrent, author of Last Call. Always fascinating stuff and even free on Sundays.

Great place to go, and Air Canada runs convenient flights from Friday night to Sunday night, so you can get in 48 hours without taking any time off of work, at low peak times at Pearson. Not bad if / when Porter adds Philly to their lineup.
Top

are you still updating/maintaining those GPS maps? might be time for a refresh!

I know! Not really, since I got my iPhone and U.S. SIM card I haven't really needed the GPS anymore.
Top

iguenard wrote:Capone's (Ratebeer 99: http://www.ratebeer.com/p/capones-restaurant/7270/)
A nice combination of an american restaurant, with amazing taps (Alsemith, Founder's, Short's, Allagash). Best thing is the small bottle shop in the back that sells singles. Managed to get Lost Abbey Carnavale, Alesmith Decadence, Dark Intrigue, Port Older Viscosity, etc). Didnt stay long enough for a bite, but this is surely on the return-to list.

I was in Philly last week and within an hour of touching down at PHL was at Capone's with a glass of Lagunita's Sucks Holiday IPA in my hand. Excellent draft list, although a number of kegs had recently been drained and not yet replaced. I also enjoyed glasses of Lost Abbey Gift of the Magi and Sly Fox Odyssey. They make some very tasty chicken wings too. On the way out, I popped in to grab a 6 pack of Founder's Centennial IPA. Excellent selection and helpful staff in the bottle shop and the restaurant itself.
That's the way she goes. Sometimes she goes, sometimes it doesn't. She didn't go. That's the way she goes.
Top

Another fun trip to Philly (check my quick reviews from last time), some new places some old favourites - decent craft beer is pretty much any where you go. Stayed in the Fairmount/Art Museum district so I checked out some new places in that area as well:

Belgian Cafe (A-) - Monk's little sister, a quieter version with a neighbourhood feel. Pretty much the same menu, almost as extensive of a beer list (less of the super rarities). I stayed on the same block it was on, so visited a few times...

Monks (A+) - Went twice. Can get busy but go in the afternoon and luxuriate over a classic beer joint, one of the best in the world.

Misconduct (A-) - Sports bar gastropub space, lots of room and some nice taps on. Didn't have food but smelled amazing. Centrally located

Prohibition Taproom (B) - Darkish decor, neo-prohibition styled joint, not unlike what some of Toronto's bars are trying to do. Smallish space, slightly awkward bar design. Fills up fast but some nice taps.

If you were wanting to crawl outside of the main drags (Rittenhouse, Old City, etc..) I would say do Kite Key (drinks), 5 min walk to Belgian Cafe (food, drinks), 10-15 min walk to Alla Spina (food, drinks) and then 5 min walk to Prohibition or there's one or two others in the area (check Phillytapfinder - great website).

Also, at the airport I think Jet Rock Bar & Grill (Terminal B & D) is your best bet, about 20 craft taps from Great Lakes, Troegs, Victory, Elysian, Kona, etc… Pretty solid selection while you wait for your flight.
Top

Speaking of Philidelphia, does anyone who has been there have any recommendations on which of the cities breweries are good for a visit? We are going there in a few weeks for a vacation, with the kids, going to the sesame street amusement park that sort of thing, but I think there will be enough time for me to hit one or maybe two of the cities breweries. We are going to be in the Hersey area for awhile so I was thinking of making one of those visits be Troegs, but is there anywhere else in Philly that is a must hit. Keep in mind that we will be with two kids so somewhere that is really small or fancy might not be the best option. I was thinking of checking out Yards, but if there is somewhere better I am open to suggestions.
Top

I'm sure almost everyone on here have heard of them by now, but it hasn't been mentioned so far in this thread.

Technically they are not in Philadelphia, but just west of the city in Ardmore. 30 minutes by train from downtown. Costs $9.50 for a round trip ticket. Super easy to get to.

The beer is awesome. All saisons and APA/IPAs both times we went. The hoppy beers are very reminiscent of Hill Farmstead's, and just as good. The food is simple, but delicious.

On top of that, Jean the owner/brewer is super nice too. We ended up getting there a bit too early on monday for the Taco Hands release. Jean was outside setting up and he told us that they wouldn't be opening for another hour, but we were welcome to smash the pinata full of hops they had hanging form their sign while we waited. We decided to let the pinata live, and go for a walk to kill some time. When we got back, he came back outside and told us he had gone inside to pour us some beers to drink while we were waiting, but when he came back out we were gone. 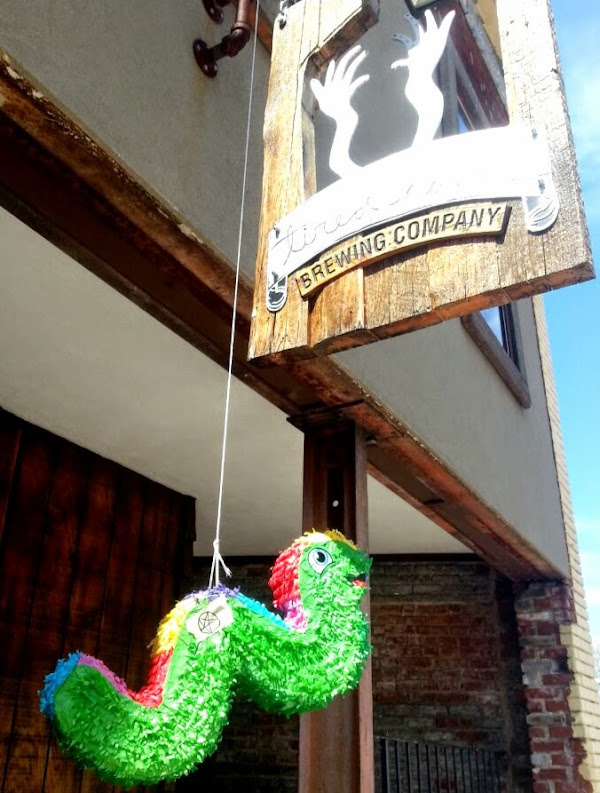 Basically, you can't go to Philadelphia and not go to Tired Hands.
Top

Working on an article about Philly to preview this year's CBC which is coming up in early May. Anyone visited recently for new & interesting beery things happening there?
Top

Aside from the usual/top spots that have already been mentioned in this thread, I really enjoyed the newest Tria location on Walnut street (the "Taproom"). Very impressive draft list, excellent service, tasty food, and a lively atmosphere. Arguably more of a wine bar than a beer spot, and yet the tap selection was still better than every place we hit except Monk's. Varga Bar on Spruce Street is a great option for dinner and drinks, with some harder-to-find locals on tap. I also liked the funky, retro vibe there. Finally, The Foodery Northern Liberties is worth considering for bottles, as I was blown away by the selection on my visit. It's across the street from Standard, so we did lunch at the latter and a bottle shop at Foodery before leaving town.
"Bar people do not live as long as vegan joggers. However, they have more fun." - Bruce Elliott
Top

Will be staying in the Rittenhouse area for a few days in March. Is Monks still the place to go in the immediate area?
Top
Post Reply
43 posts

Users browsing this forum: No registered users and 0 guests