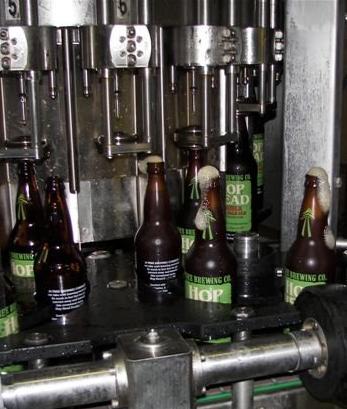 I’ve enjoyed Tree Brewing’s Hop Head for many years and I was ecstatic when they first released their Double Hop Head. Now it’s back for it’s 3rd round and it was just bottled last week. Luckily, Tree Brewing is my new local and I had a chance to sit down with the Brewmaster, Stefan Buhl.

You’ve picked up a number of Canadian Brewing Awards, what’s your brewing background, and how did you get to where you are today?

I did an apprenticeship at Meckatzer Löwenbräu in Germany, worked a couple of years, then went to Weihenstephan for a Brewmaster diploma. I moved to Calgary in ’96, and then came to Kelowna in 2000.

Hop Head was one of the first brews in BC to be seriously hopped in the ‘west-coast’ style. Was it actually the first?

What was your inspiration to brew the Double Hop Head?

All of the brewers were involved. Double IPA’s were popular, so we talked about it and we thought we’d try it as a one-time brew. Hop Head already had a good following, the people were very loyal, and the 250 cases went really quick.

We did about 1000 cases last year and the same batch size this year, with 480 cases for Ontario. We want to continue doing specialty brews, but if you make too much, it’s no longer special.

The beer geeks always want to know the details, can you give us some specs on the DIPA?

We use a lot of hops from the northwest and use pellets for good extraction and yield. They also work well in the whirlpool. The Double Hop Head is 90 IBU and 8.3% alcohol. We adjusted the recipe this year to make it a little more bitter and make the alcohol a bit higher.

Tree is celebrating their 15th Anniversary this year. Do you have any special plans or brews in the works?

We just brewed the Double Hop Head again, the Captivator doppelbock should be out at the end of march and Serendipity #3 whenever we think it’s ready. But if we don’t think it’s good, we won’t release it. But watch for something in the summer, we usually have our anniversary parties when the weather is nicer.

Flexibility, change, creativity… working with beer. We have a small group and it’s easy to communicate. And when you make people happy enough that they write you an email, it’s very rewarding.

I believe in making the beers naturally.

Do you do any pasteurization?

Do you do any high gravity brewing to increase production?

{smiles} We do high gravity… but that’s the Double Hop Head. It IS high gravity. Water only goes into the mash.

The Brewers Association in the US just changed their definition of a ‘small’ brewer, what do you think of that?

Craft beer is what you do… it’s not how much.

2011 Hop Head Double IPA tasting notes:
Copper-bronze with an off-white head, good retention, nice lace. Pacific Northwest hop aroma and flavour (nectarine, grapefruit rind, marmalade and pine). There’s plenty of hop resin and loads of bitterness, but with a really nice malt balance. It’s not a crystal malt sweetness, but a quality biscuit-like flavour with some underlying sponge-toffee. The alcohol is very subtle and it’s incredibly drinkable for a 90 IBU brew of this strength!

Hop Head Double IPA should be in Alberta and BC Liquor stores next week, and on the LCBO shelves by the end of February!

And for those in Toronto, you can meet the Brewmaster yourself at the beginning of April.