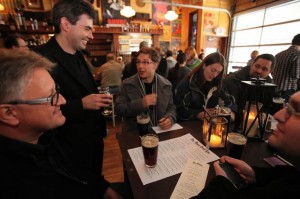 They’re here for the beer

“That’s a limited-release beer we would never, ever see in Toronto,” said Burtch. “We wouldn’t be able to get this anywhere in Ontario. So to be able to go down there and sit at the bar and order a glass was fantastic.”

Burtch and about 50 other Canadians had poured into Blue Monk on a bus expedition that’s part of a small but growing Buffalo attraction: beer tourism. Fans of the brewing art, chafing over the relatively meager selection of beer permitted in Ontario retail shops and bars, have made Buffalo a favorite destination for Toronto’s craft beer lovers.

The explosive growth of the American craft beer sector has led Buffalo beer retailers and bars to offer vastly expanded beer selections. That has led to a small but steady stream of Canadians who have made Buffalo a shopping destination for more than designer clothes.

“It’s probably the most talked-about topic on my Web site: The ongoing challenges Ontario drinkers have to get the beers they want to drink,” Enright said. “The yardstick is always Buffalo, because it’s only 90 minutes away.”

The bus trip to Blue Monk, 727 Elmwood Ave., was the first time Ontario beer lovers came as a group. Most had made the journey before, Enright said — to Pizza Plant, Pearl Street Grill or down the street at Coles — or for retail places like Premier Gourmet or Consumers Beverage, to browse a selection of “hundreds of kinds of craft beer,” said Enright. “In Toronto, a city multiple times the size of that, we have only a fraction of the selection.”

The Ontario beer menu is shorter because there are only two retail choices, Enright said: The provincial government’s Liquor Control Board of Ontario (LCBO) outlets, and the Beer Store outlets, which are run by large beer companies, Molson, Labatt and Sleeman.

Brewers can approach the Beer Store for shelf space, but the entry price can be too steep for many of the smaller American companies.

“The majority of brands at the Beer Store are different brands from the big brewers, multiple products from Molson, Labatt, Coors, Bud, that kind of thing,” plus mass-produced internationals like Heineken and Stella Artois, Enright said.

The Liquor Control Board stores have the widest selection, but it’s not easy for small American brewers to meet its requirements, Enright said. Varieties, even short-run seasonals like a pumpkin ale, have to be submitted for possible inclusion a year before they can appear on shelves, Enright said. Labels have to be printed in French as well as English.

“It’s not like you have small, independent stores where you can talk to the beer buyer and he’ll take a couple cases,” he said. “It’s a process that takes a year for a beer to get onto the shelf, which makes it very challenging to a lot of small craft brewers.”

Enright leads opposition to the Ontario government’s restrictions at another Web site, FreeOurBeer.org. He’s gone so far as to register as an importer and go through the process of getting a beer variety on the LCBO shelves. Provincial beer shoppers can thank him for the appearance of Nova Scotia’s Garrison Imperial India Pale Ale.

The labyrinthine experience helped Enright understand why “you can count on two hands the number of American craft beers we have, on a regular basis,” he said. “Right now the only (American) craft beer you can regularly get at the LCBO are Brooklyn Lager, Sam Adams, Southern Tier IPA and Anchor Steam.”

That limited supply is particularly distressing to many Canadian craft beer lovers because “Right now, America, in beer circles, is considered one of the best if not the best brewing nation — certainly the most experimental,” said Burtch, a veteran beer reviewer and director of sales and marketing for Taps, Canada’s beer magazine.

So when the thirst hits, Burtch and his likeminded friends head to Buffalo. “I’m not going to use the word pilgrimage, but trips are planned around this,” said Burtch. The busload of beer lovers was especially excited to arrive at Blue Monk, the brainchild of Coles owner Mike Shatzel, he said.

Shatzel had already made Coles, at 1104 Elmwood Ave., an attraction for nearby beer nerds. “Coles is one of the main stops within 250 miles of Buffalo,” said Harry Heatherington, a network administrator from Toronto who is active on fan-driven beer critique sites like ratebeer.com.

When Shatzel started planning Blue Monk, he was thinking of a place that continued Coles’ history of beer diversity, but aimed at drinkers who enjoyed tasting their beer.

“I wanted to set up an environment where a guy who really wanted a Trappist Belgian beer or a higher end German beer didn’t necessarily have to deal with the rambunctiousness of Coles, loud music and college kids throwing down a Jager bomb next to you,” Shatzel said.

At Blue Monk, the beer is center stage, with 32 taps and many more bottles, focused on Belgian and German brews with some Americans, Shatzel said. Coles has 36 taps, predominantly American craft. Add in Mr. Goodbar next door with about 35 taps, and that’s “70 beers in walking distance,” said Shatzel. “Throw in Blue Monk, and now you’re at 100. The Village Beer Merchant is there, too, so now they don’t even have to leave Elmwood Avenue. They love it.”

Canadian beer lovers coming “across the river” to buy and drink craft beer probably aren’t numerous enough to turn the economy around, but “it very much is beer tourism,” Heatherington said.

“I’ve been going to Coles at least 10 times a year for over five years now,” as part of beer shopping trips, and friends usually come, too, Heatherington said. “I’ve spent a lot of money on beer in Buffalo in the last years. A lot,” he said. “Like five figures.”

He has to rent a car to make the trip, but it’s worth it for a beer hobbyist like him, he said. Many serious beer aficionados like to review the different beers they’ve experienced on Web sites like RateBeer.com and BeerAdvocate.com, to share tips on what and where to drink.

When he walked into Blue Monk, “There were at least seven or eight things where I just had no clue, and I’ve rated like 4,500 different beers in the last five and a half years,” Heatherington said. “I’ve gone out of my way to try things from all over the world, and I didn’t even know the brewery in some of those cases.

“When I see that it just gives me a warm feeling inside.”

The beer probably didn’t hurt, either, he allowed.