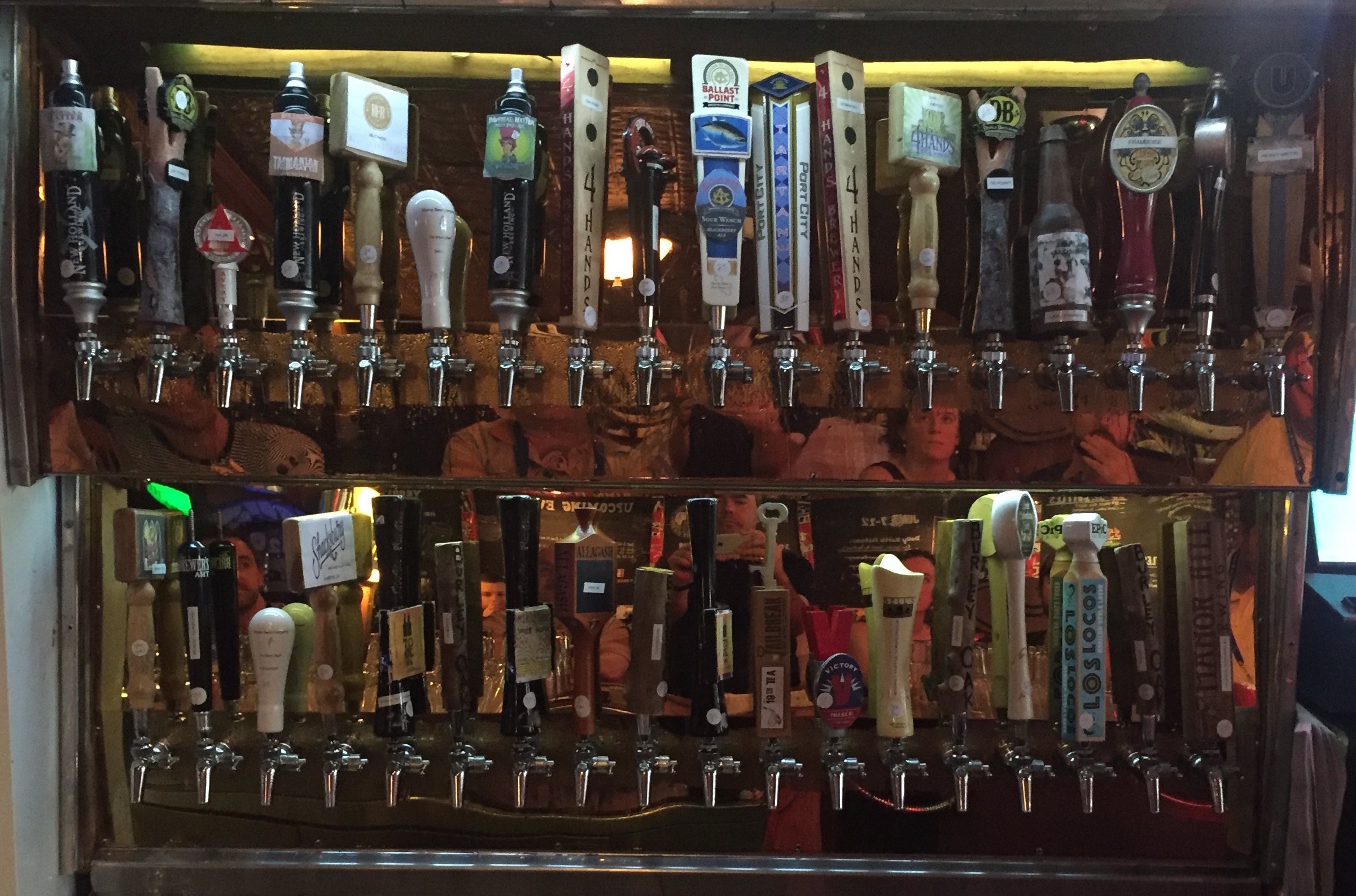 Tapping into Some New Kegs for Ontario

For those of you who know me, I have long criticized the archaic keg importation and distribution system in Ontario. It is one that is legacy at its finest, something that favours a few select companies, has not kept up with the changing beer times and ultimately has affected the potential selection that Ontario beer consumers could have on draught in the province.

To summarize the system, the only way for a local brewery agent to import a keg for in-bar sale in Ontario is to pay a significant listing fee and have it distributed by The Beer Store, or negotiate with one of three private companies (Premier Brands, Premium Beer and Diageo), who were granted authorization by the LCBO to distribute kegs. However, as these companies are brewery agents themselves, a natural conflict of interest arises when it comes to distributing the kegs of others. This was not such of an issue when the agreements were first forged many years ago, however recently with the influx of new brewery agents in Ontario, this means that many potential brands looking to get on tap in the market had to play by out of date and unfair rules. If you would like to read an in-depth analysis of the keg distribution system in Ontario, I encourage you to read Ben Johnson’s here.

However, agents perserved. Any import beer you’ve had on tap up to the present day has been technically distributed by one of the above companies, even if their local agent is another entity. A popular agent in Toronto struck a deal with one of the private companies, and their brands on draught are distributed through them. Others have agreed to pay The Beer Store’s listing fees and have brands on tap through them. Some have forgone either of these scenarios in the hopes that the system may change for the better.

Well, almost unbelievably so, perhaps it may be. The LCBO is piloting a new project whereby they will be directly importing small (up to 18L), one-way, recyclyable kegs through their Specialty Services department, which oversees Private Ordering and Consignment, two areas where a significant amount of premium bottled beers are imported through and distributed to agents, and in turn to bars and restaurants.

What does this mean? For one, agents can now request to order these small kegs as they would bottles or cans, bypassing The Beer Store or one of the three other private companies. This cuts out a huge layer of complexity, cost and conflict from the equation and potentially opens the market up for premium imported draught like we haven’t seen in Ontario ever before. Since the current system required a decent amount of volume to make it worthwhile, this new scenario allows for single or small volume keg orders with lower overhead to reach bars and restaurants. That’s not something we’ve ever had in Ontario, except possibly for those who may have attended a Saloon League event.

The potential of this is significant. Agents could theoretically bring in kegs to test the market, without making a larger commitment to a brand on draught as is the case now. Festivals could work with agents to bring in one-off kegs in a way that was otherwise not realistic. Bars and restaurants could work with agents or breweries to bring in seasonal, one-off or other interesting kegs, again something that just wasn’t feasible in the past. Now of course, the kegs need to conform to the LCBO’s outlined packaging standards, but one-way kegs have been increasing in popularity in recent years, presumaby due to ease of shipping and distribution.

We have seen in Ontario over the past number of years small step changes when it comes to the beer marketplace. As this is a pilot with numerous conditions, it is consistent with the philosophy of doing a little bit rather than drastic change. However, it is a step in the right direction to loosen one of Ontario’s most restrictive, complicated and unfair beer practices. That is something worth having a fresh glass of draught to celebrate. 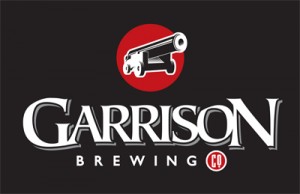 Following the successful debut of Garrison Imperial I.P.A. as part of the LCBO’s Autumn Ales release (all that’s left is what’s listed in the current inventory), The Bar Towel is happy to announce an exclusive private order for beer connoisseurs who would like some more Garrison.

This private order will not be open long so order now if you are interested.  You must purchase by the full case.  Full details of the private ordering process is listed on the ordering page. 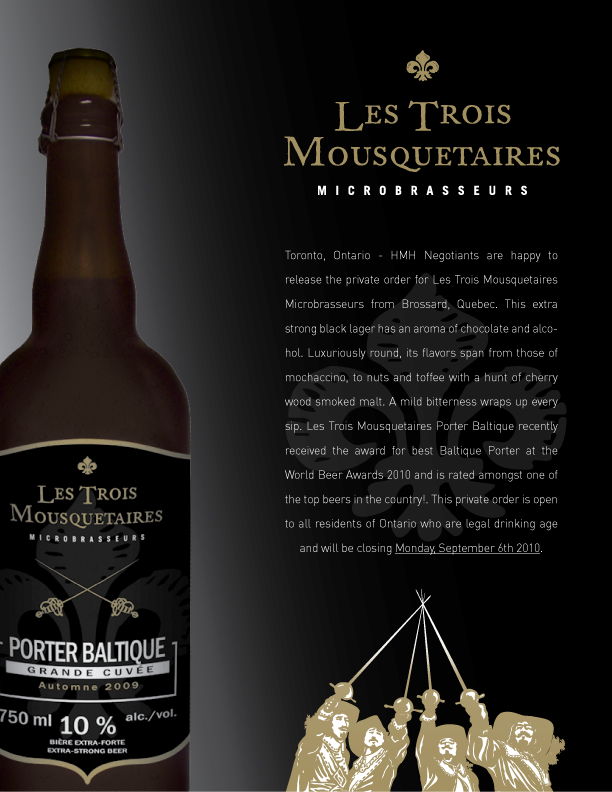 This extra strong black lager has an aroma of chocolate and alcohol. Luxuriously round, its flavors span from those of mochaccino, to nuts and toffee with a hunt of cherry wood smoked malt. A mild bitterness wraps up every sip. Les Trois Mousquetaires Porter Baltique recently received the award for best Baltic Porter at the World Beer Awards 2010 and is rated amongst one of the top beers in the country!

This private order is open to all residents of Ontario and will be closing Monday, September 6th 2010.

If you are interested in placing an order, please e-mail sales@hmhnegotiants.com the following information; your name, address, phone number, e-mail address and the number of cases you would like to order. Cheers! 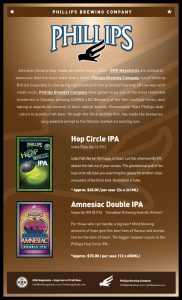 Attention Ontario hop heads and beer lovers alike. HMH Negotiants are stoked to announce that the west coast heavy hitter, Phillips Brewing Company out of Victoria, British Columbia is now being represented in the province! Starting off low-key with small roots, Phillips Brewery Company have grown to be one of the most rewarded breweries in Canada, winning CAMRA’s BC Brewery of the Year multiple times, and taking in awards for several of their radical brands. Brewmaster Matt Phillips dedication to quality craft beer, through the thick and the thin, has mad the breweries long awaited arrival to the Ontario market an exciting one. Phillips Brewing Company and HMH Negotiants have teamed up are planning on releasing two deliciously hoppy beers from the west coast to Ontario! Whether you want the out of your world citrusy burst from Phillips Hop Circle IPA, or the bigger meaner Amnesiac double IPA, we’ve got you covered. We will start things off by releasing these two brands that only the finest pallets of hop lovers can handle;

India Pale Ale for the hoppy at heart. Let this otherworldly IPA abduct the hell out of your
senses. The gravitational pull of the hop circle will have you searching the galaxy for
another close encounter of the thirst kind. Resistance is futile.

For those who can handle a big beer! Mind blowing amounts of hops give this beer tons
of flavour and aroma. Not for the faint of heart. The bigger meaner cousin to the Phillips
Hop Circle IPA.

If you are interested in placing an order, please e-mail your request to sales@hmhnegotiants.com. (Include Name, Phone Number, Address, E-mail and the number of cases you would like) This Private Order will be closing on Monday, July 12th, 2010. For more information on Private Ordering please visit www.hmhnegotiants.com/aboutprivateorder.html

The Bar Towel, through its partner corporation Cecktor Limited, is happy to announce that it has been appointed the Ontario representative for Picaroons Traditional Ales of Fredericton, New Brunswick.

At the same time we are also happy to launch a Private Order for Picaroons for Ontario consumers.  Effective immediately, Ontario consumers can order full cases of Picaroons Best Bitter Ale, Man’s Best Friend Porter, Timber Hog Stout, Yippee IPA and Feel’s Good Pilsner.  You can find out more about this order and place your order securely online here.

There’s a New Girl in Town!

Central City Brewing Co. and HMH Negotiants, are excited to announce the release of Central City Red Racer IPA for private order in Ontario! Central City, out of Surrey BC, have become known for their true to taste styles, funky labels, and use of cans. With their growing popularity, and great taste, it’s no wonder why Central City is a top rated Canadian Brewery, and why beer lovers, and patio drinkers alike would love to have this aggressively hopped IPA in their fridge.

This award winning IPA, is an ale that was fashioned to survive the long voyage from England to India during the British colonization. Hops, hops, and more hops, this ale has an intense aroma and a long lingering finish. Drink as an appetizer on its own, or pair it with a hearty dish. A beer for the connoisseur, this is a brew not to be missed. 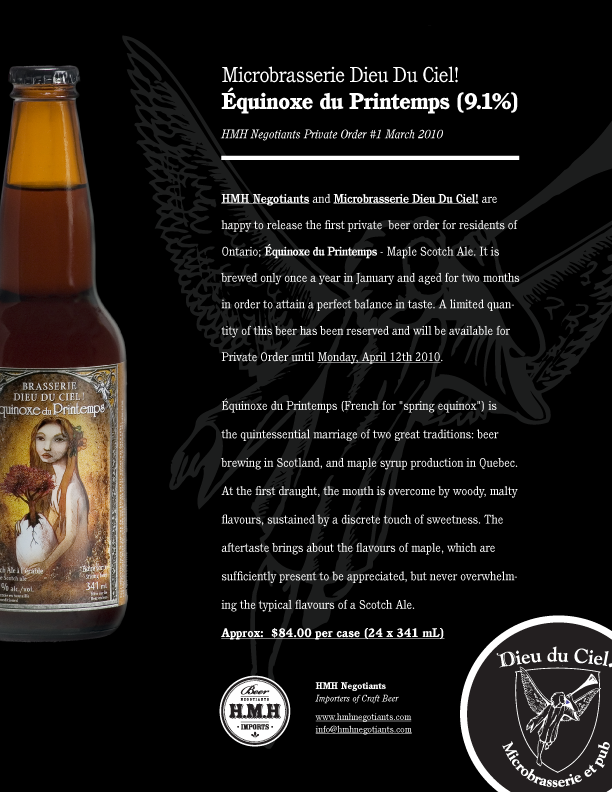 HMH Negotiants and Microbrasserie Dieu Du Ciel! are happy to release the first private  beer order for residents of Ontario; Équinoxe du Printemps – Maple Scotch Ale. It is brewed only once a year in January and aged for two months in order to attain a perfect balance in taste. A limited quantity of this beer has been reserved and will be available for Private Order until Monday, April 12th 2010.

Équinoxe du Printemps (French for “spring equinox”) is the quintessential marriage of two great traditions: beer brewing in Scotland, and maple syrup production in Quebec. At the first draught, the mouth is overcome by woody, malty flavours, sustained by a discrete touch of sweetness. The aftertaste brings about the flavours of maple, which are sufficiently present to be appreciated, but never overwhelming the typical flavours of a Scotch Ale.

Approx:  $84.00 per case (24 x 341 mL). If you are interested in placing an order; please e-mail tomas@hmhnegotiants.com the following information; your full name, address, telephone number, e-mail address and the number of cases you would like to order. Cheers! 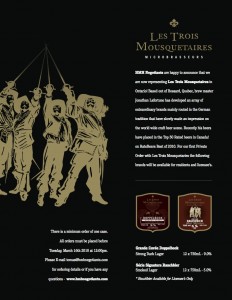 HMH Negotiants are happy to announce that we are now representing Les Trois Mousquetaires in Ontario! Based out of Bossard, Quebec, brew master Jonathan Lafortune has developed an array of extraordinary brands mainly routed in the German tradition that have slowly made an impression on the world wide craft beer scene. Recently his beers have placed in the Top 50 Rated beers in Canada on RateBeers Best of 2010. For our first Private Order with Les Trois Mousquetaries the following brands will be available for residents and licensee’s;

This order will be closing on Monday, March 16th, 2010 at 12:00pm. If you would like to order this brand, please e-mail tomas@hmhnegotiants.com the following information; your full name, mailing address including postal code and city, telephone number, e-mail address and the number of cases you would like to order. If you have any questions or concerns please feel free to e-mail us. Cheers!

Wine import agency Stem Wine Group have announced the addition of Italian artisanal brewery Birrificio Brùton to their product portfolio.
Brùton is based in Maremma (southwest Tuscany), and is owned by the son of a well known winemaker from the region.
Stem have three Brùton beers available via private order: Brùton di Brùton, Brùton Lilith and Brùton Stoner. Each sell for $15.99 per 750 ml bottle, available in cases of 6 bottles.
To place an order or for more information, contact Stem Wine Group.