October 17th, 2011 Posted by Bar Volo Uncategorized No Comment yet

Cask Days 2011 will take place on Sunday, October 30th, 2011 at the Hart House Quadrangle (University of Toronto Campus). As of date we are up to 100+ casks, 52 participating breweries from across Canada and 7 days of events.

More information about the events surrounding Cask Days 2011 have been released (below). Don’t forget to check out the current list of beers that will be available at the main event. Costume’s are encouraged for Session 2! (Best costume wins a case of Dieu Du Ciel! Peche Mortel) Hope to see everyone soon!

Cask Days was founded at barVolo in 2005. Please be advised that this event is a 19+ and  CASH ONLY. There are several ATM’s available on campus for your convenience. For more information please visit http://caskdays.com or e-mail us info@caskdays.com. Tickets are 75% sold out. Any Remaining tickets will be available at the door. For live information feed’s please follow @CaskDays on Twitter. Cheers !

July 22nd, 2011 Posted by Rob Symes Uncategorized No Comment yet

Homebrewers rock and form a vital part of Toronto’s vibrant beer scene. TBW’s Homebrew Contest is our way of recognizing the fine efforts of the homebrewing community, and we encourage all homebrewers to participate because we don’t charge an entry fee. That’s because it’s our belief that this Homebrew Contest should be accessible to all.

We’re currently finalizing this years prizing, and will release that information shortly, but expect it to be good! Last year’s prizes included the overall prize winner brewing a batch of his beer at Amsterdam brewery, a brewer for the day at the Granite under the supervision of Ron Keefe, delicious hops from Hops Direct and some great prizes from Canadian Homebrew Supplies, including a beautiful Blichmann brew kettle! To see how cool it can be to win, check out this write up of our grand prize winner’s brewery brew day.

Although TBW will be using the BJCP category guidelines to group the beers, the judging will not be BJCP sanctioned. When you enter you’ll need to determine which BJCP category is the best fit. You’ll find a complete list of all the categories here. The contest entries will be judged bythe very same people who run the week – brewers, bar owners and beer press. Don’t worry – we know good beer – if you’ve brewed a winner we’ll recognize it!

The entry form is simple and easy to complete and you’ll find it here. As long as you live in the great white north and you make homebrew, then the contest is for you. The rules and address you need to get your entries to are here. All entries need to be received by Friday September 9th at 9pm. If you have any questions we’ve not covered off, contact rob@torontobeerweek.com

June 27th, 2011 Posted by Bar Volo Uncategorized No Comment yet 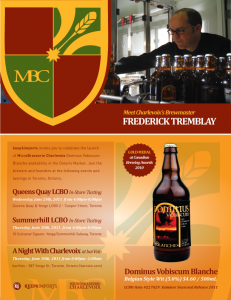 Join founder and brew master Frederick Tremblay at the following events and tastings in Toronto, Ontario;

* Food pairings provided by A Taste of Quebec

February 23rd, 2011 Posted by Troy Burtch Uncategorized No Comment yet 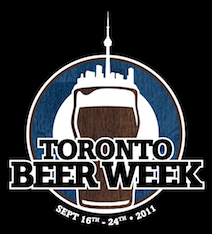 February 23, 2011 (Toronto, ON) – While St. Patrick’s Day may be on March 17th, craft beer drinkers will be awaiting the 19th with anticipation, as Toronto Beer Week (TBW) marks the start of its six-month countdown by inviting beer lovers on a drinking tour of some of the city’s finest establishments. The 2011 edition of TBW will take place over ten days in September from the 16th to the 24th, but drinkers can get a preview of the fun on March 19th.

Two pub crawls will hit the streets of the city at 2pm.A downtown crawl will be hosted by Cass Enright (founder of the popular Bartowel.com and Freeourbeer.org) and Rob Symes (news editor on Bartowel.com and contributing writer for TAPS The Beer Magazine). The crawl will begin at the Queen & Beaver at 35 Elm Street, before proceeding to The 3 Brewers, Duggan’s, beerbistro and C’est What.

At the same time, a second crawl hosted by Troy Burtch (Director of Sales & Marketing with TAPS The Beer Magazine and creator/writer of the Great Canadian Beer Blog) and Nick Pashley (author of ‘Notes on a Beermat’ and ‘Cheers! An Intemperate History of Beer in Canada’) will hit Kensington Market and the Annex. After meeting at The Cloak & Dagger (394 College Street) the next stops will be Caplansky’s Delicatessen, Burger Bar & Tequila Tavern, The Harbord House and the Victory Cafe.

A number of one-off beers will be available at most participating locations in addition to an already stellar lineup of brews. Food and drink promos will also be available at certain locations.

TBW crawl host and notorious propper-up of bars, Nick Pashley is a fan of pub crawls, and provided this quote in the run-up to the March 19th events: “Why a pub crawl? If you have to ask, this might not be quite for you. Some of us who can’t wait for Toronto Beer Week have put together not one but two pub crawls. The concept is simplicity itself: turn up, buy beer, drink same, tip the bar staff, chat amiably with fellow pedestrians, move on to next pub and repeat as required. Bask in the company of Cass and Rob downtown or Troy and Nick in lower midtown, visit a few fine pubs, and drink excellent craft brews. You have better things to do?”

While there is no fee to participate in either crawl – other than your beer… we’re not that generous – RSVPing is recommended. For the downtown crawl email numbers to Rob at rob@torontobeerweek.com , and for Kensington Market / the Annex email Troy at troy@torontobeerweek.com.

About Toronto Beer Week
TBW is a series of events dedicated to the celebration and advancement of the craft beer movement. TBW will showcase authentically brewed and flavourful beer, the talented brewers who create them, and the licensees who proudly support them. It’s all about good beer – no bland, mega beer permitted!

TBW is a collectively owned organization involving some of Toronto’s most seasoned and passionate beer industry members. Our team includes publicans, brewers, media, marketers, and authors, all bringing their valuable experience and vision to create a significant event that reflects the best interests of all participants. 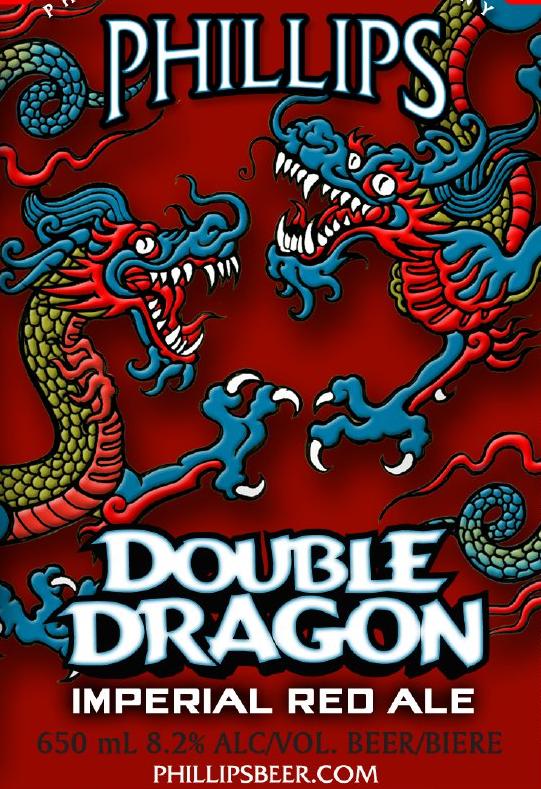 It’s the year of the Rabbit and there’s certainly good things hopping at the Phillips Brewing Company!

In addition to releasing the Double Dragon Imperial Red Ale, they’re replacing the Surly Blonde with Hoperation Triple Cross Belgian IPA. And as if that’s not enough for the hop heads, they’re introducing a Hop Box Showcase (12 pack), which includes Hop Circle IPA, Skookum, Krypton Rye PA and a revolving specialty that will start with the Centennial IPA (a new single-hopped IPA in their GrowHop Series)!

If hops aren’t your thing, they’re also releasing bombers of their Ginger Ale, which would probably pair really well with Chinese food.

FORGET THE NOG …TRY SOME BOG

December 16th, 2010 Posted by Beaus Uncategorized No Comment yet 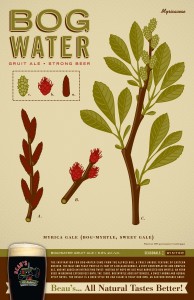 When thinking of the winter festive season, one may not readily picture images of a bog, but that was the inspiration for Bog•Water – the winter seasonal beer from BEAU’S All Natural Brewing Co.

In designing the beer, BEAU’S wanted to conjure up the emotions of a solitary winter walk at dusk through the Alfred Bog, a truly unique feature of Eastern Ontario The result is Bog•Water – a unique beer style we can claim is truly our own … an Eastern Ontario Gruit.

The malt and yeast profile of Bog•Water is that of a Belgian Dubble, a very contemplative and complex ale, with an added and interesting twist … instead of hops, BEAU’S uses a wild harvested herb known as bog myrtle, which was used in brewing extensively until the 1500s.

In the years before the Bavarian Purity Act of 1516, many herbs and spices were used to flavour and preserve beer. Bog myrtle and hops were two of the most dominant herbs. In fact, bog myrtle was so extensively used that in parts of Europe you could even pay your taxes with it!

With the introduction the Act, came the unfortunate consequence of destroying many excellent interpretations of beer that used herbs other than hops and because of this, there are no longer any recognized styles or recipes for a brewer to rely on for reference.

“This was both challenging and freeing” says Steve Beauchesne co-founder of BEAU’S All Natural Brewing Company, “As we were literally creating a new style of beer by venturing back in time to brew with this herb.”

Harvested by an Algonquin native from the wilds of northern Quebec, BEAU’S uses the entire bog myrtle plant as each portion adds to the brews distinct flavour and aroma – strong herbal tones coming from the branch, bitterness from the leaf and the cone providing a peppery spice. All working together to provide a malty, plum-like fruitiness that is offset by spicy, earthy bitterness and pairs great with foods like Roquefort cheese, Kielbasa or even a banana split.

November 8th, 2010 Posted by Great Lakes Uncategorized No Comment yet 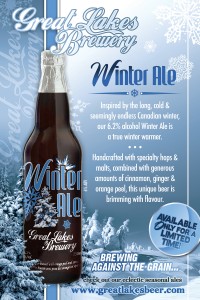 Join us at Project X this month as we tap 2 feature beers:

This month’s event is catered by the fine folks at The Local, who will be bringing a Potato & Leek Soup, Irish Stew, and Hummus Dip.

Don’t forget to wear your poppy – we’ll have a collection box for for Remembrance Day. Please give generously.

Also – we’re proud to announce that Tenish Anyone IIIPA was voted the top rated cask at Volo Cask Days. Thanks to everyone who voted for us!

The founders and brewers of Brasserie Dieu Du Ciel! will be in Ontario for a series of special events celebrating the release of their LCBO microbrewery feature. These events will also commemorate the arrival of Brasserie Dieu Du Ciel!’s availability on draught at a hand full of establishments for this weekend only! Please visit www.hmhnegotiants.com/ddciontario.html for more information. All events and beer availability is subject to change.

*All beers will be available on draught. Brewers/Founders present.

Ontario Craft Brewers Newsletter for May, 2008

May 17th, 2008 Posted by Bar Towel News Editor Uncategorized No Comment yet

The May, 2008 newsletter from the Ontario Craft Brewers has come out, and it includes info about the following:

To receive future newsletters via email, fill out the subscription form on the OCB website.